Written by Don Amador on 20 January 2009. Posted in The General's (aka Don Amador) Recreation HQ.

Thoughts on Mixed Use in Region 5

From The General's BLOG - Thoughts on Mixed Use in Region 5

In response to a Jan. 13, 2009 “mixed-use” memo from Region 5, first let me state that I believe Region 5 has created an number of unnecessary bureaucratic hurdles when it comes to the designation of level 3 roads as mixed-use where that road is open for use by both street legal and non-street legal OHVs. I have shared those views with R5 on a number of occasions and in comment letters on travel management planning efforts. 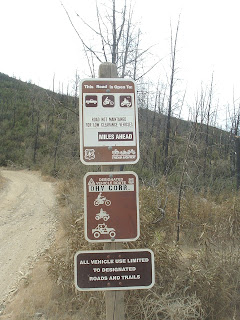 It has been my experience that there is little – if any on some Forests – accident history on level 3 roads between OHVs and passenger vehicles. If there were accidents they were most likely OHV vs. OHV rather then OHV vs. a passenger car.

If there is a silver lining in that memo - it is the direction for encouraging Forests to reclassify a level 3 road to a level 2 road. I think that is a plan of action that OHVers could and should support.

The only other viable approach – and one that I hope R5 will support - would be to construct parallel (companion trails) or alternative trails that lead to the same destination or complete a loop opportunity. Many of those trails could be constructed basically in the road prism where there should be less environmental concerns or obstacles.

Read more on The General's Blog - Thoughts on Mixed Use