About you, your 4x4 and access
Categories
Tags
Calendar 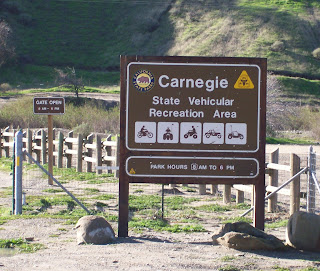 Some HQ readers will remember that on July 2, 2012, the BRC issued a news release regarding the advocacy role of East Bay Regional Parks District regarding their demands for “passive use” of the Tesla Property.
June 2, 2012 BRC News Release with info

That concern prompted HQ commander and BRC western rep, Don Amador, to file a Public Records Act request on the District to see if there has been any pressure from local Eco groups and the adjacent land owner – Celeste Garamendi – to influence the District to try ban or restrict OHV use on the Tesla Property.
The District recently responded to the PRA with a lot of documents. HQ is still reviewing the information, but what we have seen so far is that there was a concerted effort by Celeste Garamendi in early 2007 to pressure the District to include the Tesla property in their 2007 General Plan map which would then drive the District’s current general planning process which has public meetings in Sept. 2012.
In the Celeste March 19, 2007 letter to District Board Member, Ms. Wieskamp, you will notice her desire to create political momentum …”a change in policy direction for the property [Tesla] will have to evolve from outside of the OHV Division.”
Celeste Garamendi March 19, 2007 Letter and other correspondence with the District

Thankfully we have a very active OHV Commission and on July 16, 2012, OHV Commissioner, Diana Perez, countered the Buchanan letter with a well written response to Secretary Laird.

John Stewart
...on the Trail

The State of California, like most states, is facing tough choices in establishing a balanced budget. Faced with significant loss of services, Governor Jerry Brown has tasked legislatures with spreading cuts to all areas. OHV leadership expressed fear of drastic reduction in the OHMVR program, and the continued loss of reserves earmarked for acquisitions and large capitol improvements of State Vehicle Recreation Areas (SVRA) to Aaron Read and Associates in an effort to establish a long-term action plan for continuation of a solvent program.

Outdoor Adventure USA
...around the Campfire

For those who were able to make this trip, we discovered one of the most extraordinary places in the USA. Our entire trip was spent in the Navajo Nation and we were fortunate to get a glimpse of the immensely rich cultural and historic character of this remarkable place.

As we have mentioned before, this type of trip is not just about seat time in the 4WD. It is an adventure to explore the land, it's history, it’s people and, of course, the scenery. To do this, it necessarily meant that we needed to get out of our vehicles and enjoy the adventure up close. Full appreciation was not possible without knowing some history of the area and without some "foot" exploration. We did just that and have the worn out boots to prove it.

Abbey Issues Directive to Strengthen Safety and Oversight at Events

(Nov 19, 2010) - An internal review by the U.S. Bureau of Land Management (BLM) released today found its policies and procedures for permitting off-highway vehicle (OHV) events are sound, but the agency did not adhere to these procedures in permitting Mojave Desert Racing (MDR) Production’s California 200, the race that resulted in eight spectator fatalities in a tragic accident in San Bernardino County on August 14, 2010.

(Oct 29, 2010) - The new season for off-highway vehicle (OHV) enthusiasts at the Imperial Sand Dunes and nearby Superstition Mountain recreation areas opens with an emphasis on safety, the Bureau of Land Management (BLM) announced today.

According to Margaret Goodro, BLM El Centro Field Office’s new manager, “I’m looking forward to getting out in the desert and meeting the generations of responsible OHV enthusiasts.” She reminded off-roaders that they must limit their speed to 15 mph when within 50 feet of others.